A month ago I bought a broken pair of Grado's entry level SR80 headphones on eBay. I had heard rumors of the Grado sound, and I actually found a pair of SR60s at Goodwill that I really enjoyed using. I wanted to see what the difference in sound was between the two models. Spoiler: there is a slight difference in sound, but you really have to A/B them. I prefer the SR80s but would be just as happy with the SR60s.

At the time, Grado were actually preparing to launch the SR80x, so low stock on their S-series had driven prices up. I figured a broken pair should work fine for me, as long as the drivers weren't damaged.

The photos in the auction listing showed a broken cable and detached driver assembly: 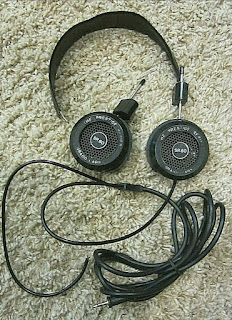 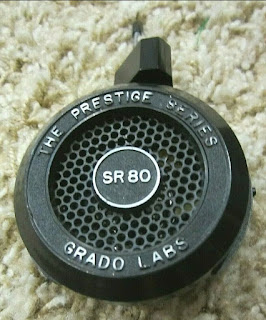 All the pieces were intact, and the seller was very candid about the condition they were in, so I bought them.

When I inspected them on arrival, I found that they appeared to have been crushed. The force of the crush had driven the driver part of the assembly into the outer housing, shearing off one cable completely and damaging the cable on the other. Later Grado designs for the ear cups prevent this from happening (the inset part containing the driver runs deeper so it rests against the outer cup).

There was also some scratching and wear on the plastic, a tiny split in the vinyl headband cover, and damage to the plastic grille on the detached ear cup (which you can see in the second photo above).

I was happy with my purchase and couldn't wait to get to work.

The original cable on Grado headphones is exceptionally nice. It's heavy, well-shielded, long, and overall better than most headphones at their price point. I hate it. For me, the cable is heavier than the headphones itself, which means the SR80s are off-balance in use. It's thick, difficult to coil and store, and easy to twist, since the ear cups can rotate 360-degrees. The plug is too thick to work with anything in a case. Plus, I just don't like Y-cables. If you can have a single cable running to the left ear, why would you not do that? And ideally, make it replaceable?

Luckily, there's a mod for that, and I'd already done the mod on my Goodwill SR60s. I'm not going to go into detail, since this video covers it. I can't embed the video, but it goes through the process of loosening the glue with a hair dryer to pull apart the ear cups, then mapping wires, boring holes in the plastic casing, and all that good stuff.

I made a few adjustments to the video instructions - I threaded the cable through the headband cover to hide it, as well as a couple other minor tweaks. The big tweak was relocating the entry of the cable, since I was using a thicker, nylon-covered cable to give it a retro look. The cable enters at the top of the outer case, about 4mm back from center to clear a bump of plastic on the caliper that holds the ear cup in place. I don't have a photo of that bump, but here's how I routed the cable in. 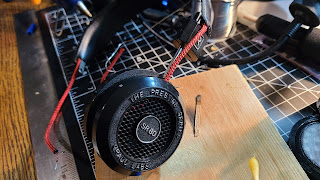 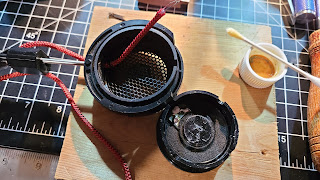 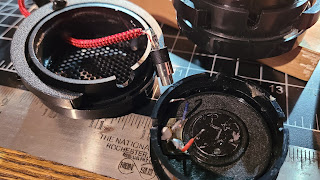 The ear cups still need to pivot for proper fitting, and it's easy for the cable to get in the way of that. When I modded the SR60s, I routed the cable in at the top of each ear cup, but the cable prevented them from pivoting up/down in the caliper. I had to file a groove in the plastic bump on the caliper to get them to sit right. Anyway.

The cable was trimmed just long enough so that when both ear cups are fully extended (the largest size setting the headphones have) the cable stretched past the diameter of the ear cup by about 10mm. That gave me just enough room to solder the wires in place. 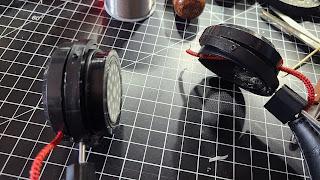 The cable I used has copper wire with an enamel coating (you can sort of see it in some of the upcoming closeups). To solder those wires, I found a YouTube video that explains the process. Very briefly, with the enameled wires exposed:

The combination of the flux and heat will burn off the enamel coating and get the wires tinned nicely. Thanks AJ! (He has more great DIY & coding videos on his channel, so check them out.)

I reassembled the headphones, tested them, and they actually sounded really great! So the cable mod was a success.

Now the for the rest of the damage. The side that had broken off is usually held in place by a press-fit mechanism: there is a hole punched in the spring steel headband that snaps in place on a round bump inside a plastic piece. Since that bump had been damaged whenever the headphones pulled apart, that side wouldn't stay in place. I just used hot glue to reattach it.

The plastic grille on the ear cups was cracked. I tried using Super Glue to fix it, but there just isn't enough plastic to hold well. So I figured why not just replace them? And why not do it with style? I already used the sharp-looking red nylon cable for the single-cable mod. What if I had a red grille to match? Maybe a metal grille? And why not a nice leather headband?

The leather headband part was easy (sorry, I forgot to take photos). I de-soldered the right side cable and pulled the plastic mount off the steel headband spring. I threaded the exposed cable wires through the hole in the headband spring and used heat-shrink tubing to keep it in place while I threaded the (much tighter) new leather headband cover onto the spring. Then I carefully cut the heat-shrink and gently finished pulling the cable through with pliers.

With the headband in place, the next step was to get rid of the broken grille material. It's just plastic, but held in place with what looks like black epoxy. I was able to cut it out with an X-Acto knife. 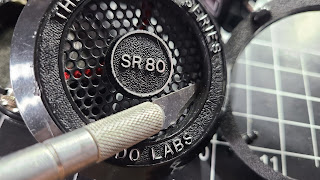 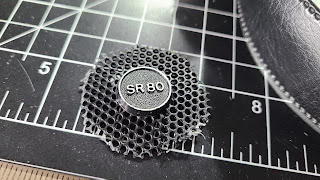 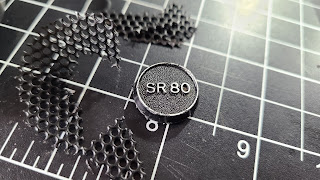 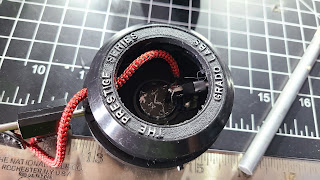 That of course left a bunch of material in place on the inside of the ear cup as well as the back of the "SR80" badges. The badges I could sand down pretty easily. 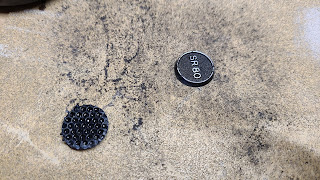 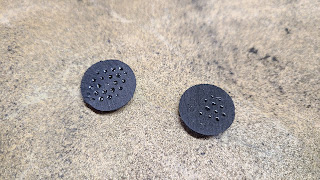 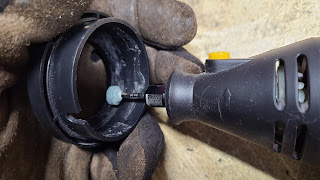 This had to be done carefully, since the shape of the ear cups affects the acoustics of the headphones. I didn't want to carve out too much plastic, just remove enough of the old plastic grille from where it was glued to the inside ring. I was mostly successful.

I purchased the cheapest speaker covers I could find on Amazon and a can of red spray enamel from my local hardware store. I didn't get a clear coat, since the grilles are recessed and shouldn't see a lot of scuffing. Time will tell. 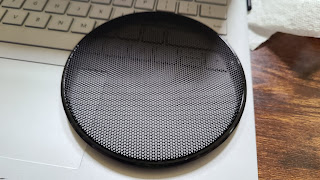 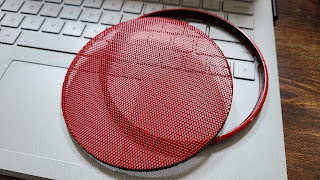 I traced the circumference of the ear cup on the back of the grille and cut it out with shears, making sure it fit well by cutting a little big and continuing to round the edges while test-fitting. 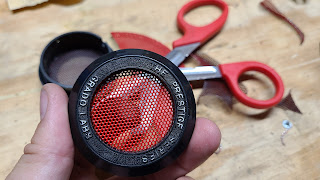 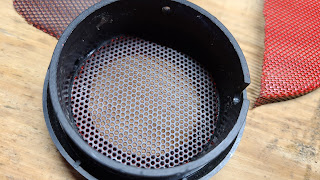 The glue holding the old grille in place was difficult to remove completely. There was a lot of scraping, fitting, and more scraping, by hand and with the rotary tool. I wanted the new grilles to sit as flush as the originals against the inside taper of the headphones.

The new grilles will also affect the sound, I'm sure, since they are metal instead of plastic, and are a little more dense. The perforations are smaller. Fortunately (unfortunately), my hearing is garbage overall, so such nuance will be lost on me.

Using JB Weld epoxy, I attached the new grilles, and then the badges. Placement of the badges is probably a little off, since I just eyeballed them. 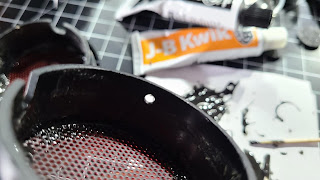 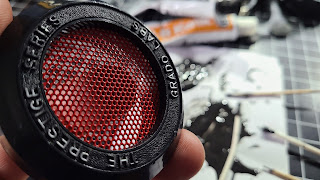 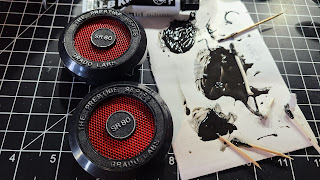 Once that was allowed to completely set, it was time to reassemble. Since I'd already done all the cable measuring and soldering once, doing it a second time was easier. I also took the opportunity to deepen the groove the aux jack sits in so the ear cups could be pressed back together closer to the original tolerances. When assembled, there should be about a 9mm space for the ear cushion to attach. 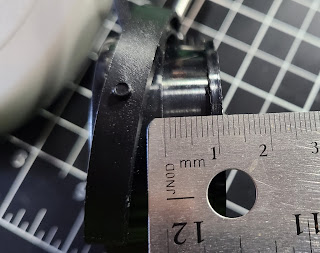 I used a blob of hot glue to keep the wires from pulling out of the ear cups. 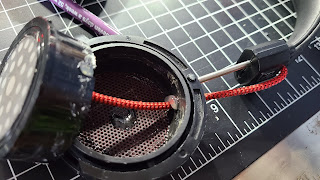 A thin line of hot glue was enough to glue the parts of the ear cups back together, and almost gave me enough working time to get everything adjusted to that 9mm gap.

I debated doing the next step, but figured why not. I'd already put plenty of time into these headphones, but I liked them enough that they were going to be my daily drivers (snicker). I might as well go all the way. So to fix the last aesthetic issue I had (barring the scratches & scuffs, which I think gives them some character), I decided to paint over the worn silver lettering with red enamel. 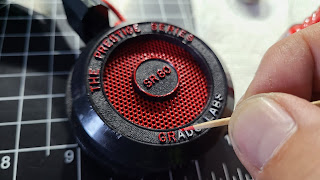 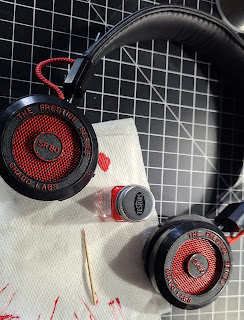 The broken headphones were US$35. I bought two red aux cables, new ear pads, the leather headband cover, speaker grilles, and spray paint. The headphone jack & various glues I already had. Overall, I spent about US$78 and five hours on them, not counting epoxy & paint dry time. A third of that cost was the headband cover! But in the end, I think they turned out well. 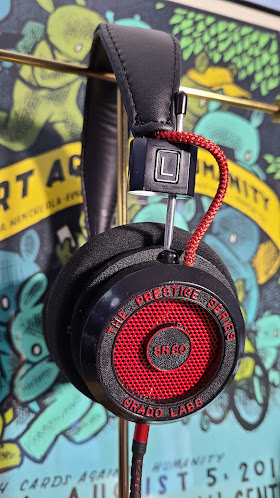 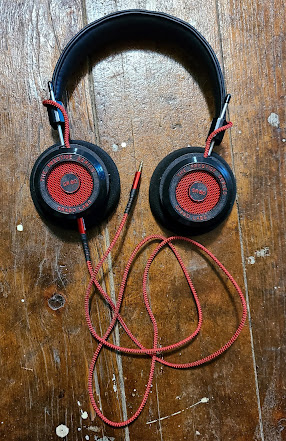 If you're looking into Grado headphones, the sound is definitely something wondrous. They aren't heavy on bass, though they can handle it if you crank the bass in your equalizer settings. They're very mid-heavy and they sound very open, as though you're listening to a live performance or very nice speakers. If you listen to music that tends to emphasize vocal performance or acoustic instruments (classical or jazz) definitely try them out. I've been enjoying them with guitar pop and electronic music.

So far they sound great to me, no matter what I throw at them. I'm sure the higher-end models will have more detailed sound, but I'm afraid a lot of nuance will be lost on me. Thanks tinnitus.

From bouncing around the internet, here's a quick breakdown of the differences between Grado's Prestige Series models:

The difference in sound is apparently noticeable between the SR60 and SR325, but incremental from model to model as you go up the chain. What you gain with the upper levels are better materials and slightly better sound tuning. If you can afford the SR325, go for it. If you just want "the sound," the SR80 is probably the best sound/cost ratio. Some day I hope to get a pair of SR325s, or better still, the cream of the crop RS2e!

Not sure if I'd mod the expensive ones...